The  Technological Development Support Laboratory  ( LADETEC ) is a  holding  of laboratories belonging to the  Chemistry Institute  of the  Federal University of Rio de Janeiro  ( IQ-UFRJ ). Its structure was built in 1984 from the enormous lack of quality analysis in High Resolution  Gas Chromatography (HRGC) and its coupling to the computerized Spectrometry Mass in the country. Structured as support for chromatography laboratories, mass spectrometry and geochemistry, its creation was strategic at a time when this technology was growing. 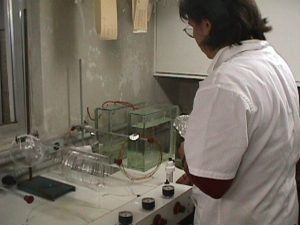 The report of the Mass Spectrometry Commission (RENEM) in 1982, showed that in Brazil there were 54 mass spectrometers, most of them unutilized due to the lack of maintenance that it was almost impossible for universities. Other findings of this report was the formation of operators of this technology and encouraging research in this area. That same year created the  Cappilary Columns Preparation Laboratory,  then transformed into  Columns and Chromatography Preparation Laboratory in order to develop and disseminate the practice of HRGC the country. It started as a craft factory of glass capillary columns that gave technical support to other associated laboratories and other research groups and companies. Today, a restructuring transformed it in the new Research Laboratory of Chromatography and Columns (LPCC). The name change is meant to emphasize its performance in different chromatographic processes as well as the various applications in analytical chemistry.

Before long, LADETEC became a mechanism to support more than 80 groups of scientific and industrial research, between public and private entities. It started generating resources to maintain much of its research activities and to support academic groups that do not have the resources to do analysis or maintain adequate analytical framework.

Our operations in university-business-society-quality interface is a practical example of entrepreneurship, quality assurance and use of the equipment park in multi-user indiscriminate system.

This initiative was supported in 1986 through the FINEP aid project approved on notice of the testing phase of the Support Program for Scientific and Technological Development (PADCT), focused on units Service Providers, to which by virtue of the notice should seek self sustainability after completion of the project. The project was evaluated by FINEP, manager of PADCT as one of the successful projects in the testing phase, which served to justify the next steps of the program.

The first services and R & D projects were with the Geochemistry Sector CENPES - PETROBRAS, as well as companies from the petrochemical complexes in Camaçari (BA), Triunfo (RS) and Mauá (SP) and the industrial center of Resende (RJ). 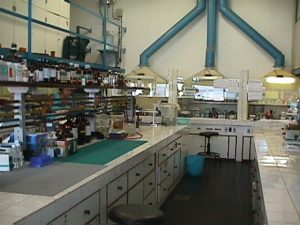 From 1988 LADETEC started operating in three shifts, 7 days a week, providing 24 hour operation. An extremely complex logistics for the time. The Fundão Island was isolated and virtually deserted at night and very limited access. The technicians of night shifts were transported by service who went to the Center for Electronic Computing (NCE) which already operated 24 hours for 7 days a week. And a special round of security has been established in block A of the Technology Center where the labs were located. Also, because of these difficulties, it was planned a accelerated computerization of the procedures to increase their productivity and reduce the need for technicians throughout the night  and weekends.

In the 90s, the three formal rounds for an extended workday was replaced (from 07:00 to 23: 00), with the night shift for automatic operation of analytical tools, as an example of how the university facilities can be used in its fullness, reducing the cost / benefit of investment in education, science, technology and innovation in Brazil.

GROWING TOGETHER WITH SCIENCE

The effort to establish itself in new areas caused a redirection of activities, reducing the availability of LADETEC in serving the industrial demand, but still attending to the other demands of society.

The increase in the number of requests for biological fluids analysis, pharmaceuticals and environmental samples (human ecology and occupational health), led to the creation in 1989 of LABDOP to specifically take care of this analytical segment. The relevance of mass spectrometry in solving problems in chemistry and related fields at the molecular level, led the establishment of the Mass Spectrometry Laboratory (LABEM) , spreading and training professionals in this technology.

Environmental awareness that accompanied the process of globalization has led to the creation of  Geochemistry Laboratory of Organic Molecular and Environmental (LAGOA) , also in 1989, which absorbed the LADETEC activities focused on geochemical oil exploration, analysis of geological organic materials general and oil and its derivatives in particular, as well as synthetic and renewable liquid fuels which reported the constitution of LADETEC and were attached to it.

The expansion of the initial demand of the Ministry of Agriculture, Livestock and Supply (MAPA) in 1989 for the analysis of residues in food service refrigerators, caused the emergence of  Residue Analysis Laboratory (LAB RES)  in 1994. The laboratory currently is expanding the number of detectable substances and also operates in doping analysis in horses.

The Inborn Errors of Metabolism Laboratory (LABEIM), which served as support for the creation of LAB DOP, became partner LADETEC, starting to integrate our associated laboratories in 2005. It serves the entire hospital network of the State of Rio de Janeiro to early diagnosis of inborn errors of metabolism (IEM) and in the near future the service will be extended to the whole country.

In 2011 the Geological and Chemical Analysis Laboratory ( LAGEQUIM ) was created with the objective of characterizing oils, rocks, sediments and correlations oil-rock through the Gas Chromatography and spectroscopy techniques.

LADETEC and its pioneering expertise in the gas chromatography field and its coupling mass spectrometry, was urged to engage in solving the needs of Brazilian society.

Thus, LADETEC was envisioned to answer the fuel industry to assess the environmental impact, the use of alcohol as biofuel and in parallel enhance geochemical prospecting of oil with the introduction of the concept of biomarkers in the exploration area Petrobras in 1984.

In 1989 two major challenges, the analysis of residues of veterinary drugs and national cattle herd horse became immediate priority due to the interruption of exportation due to of technical barriers imposed by the European Community. Thus, MAPA encouraged the development of this  expertise  in LADETEC. Simultaneously , the Brazilian Football Confederation (CBF), about to host the World Cup 1989 Soccer America in Brazil, requested support to carry out the doping control in competition. Both efforts have led to establishment of the LAB DOP, later sharing this responsibility with the LAB RES.

The need for accreditation of testing according to ISO 17025 by Inmetro, led to the creation of LABCAL to ensure quality and agility in the calibration of volumetric instruments.

The advent of doping control at the 2007 Pan American Games led to the start of concern for analysis of proteins and blood, with the creation of  Proteins and Blood Analysis Laboratory (LAPS) and trying to start analysis is not aimed at the target by acquisition of the first comprehensive two-dimensional gas chromatograph coupled to mass spectrometer time of flight in Latin America.

Finally, the huge effort to carry out the doping control of the Olympic and Paralympic Rio2016 led the transformation of LAB DOP, at the suggestion of the Ministry of Sport, the  Brazilian Laboratory Doping Control (LBCD) . And the hugeness and depth of this action resulted in new horizons for LADETEC and their associated laboratories. 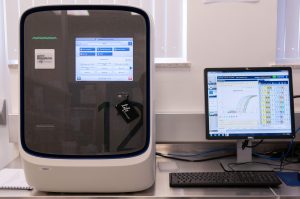 After overcoming the summons to face major challenges, the organization for participation in major events led to the creation of new laboratories making LADETEC one of the most complete laboratories of Brazil in terms of Organic Molecular Analysis.

The Laboratory of Molecular Biology of Blood and Proteomics (LABMOPS)  established in 2015 to widen the activities of genomics, hematology, genetic research on doping and application neglected diseases. It has one of the most modern parks in the country molecular biology. 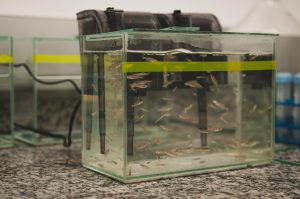 In 2017, four new laboratories were established and associated structure LADETEC. In the field of omics the   Laboratory of Proteomics (LABPROT ) and the  Laboratory of Metabolomics (LABMETA) use the most modern equipment to expand these two giant fields of knowledge with research and service.

The Research Laboratories, Laboratory of Development and Innovation (LPDI) uses metabolomics in their investigations of the fish zebrafish as an alternative model for human metabolism and for the diagnosis of neurological diseases such as Parkinson's disease. The Laboratory on Research Anabolic Agents (LAPAA) operates in endocrinological studies, mainly syndromes and disorders involving steroids, eg Cushing's disease. 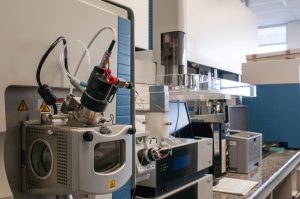 Designed in 2001, the Center for Forensic Analysis (NAF) formalized its service activities in 2018, establishing itself as a differential in forensic chemistry. Its main focus is on analysis, investigations and research in forensic matrices, using high-performance analytical techniques.

The Center for Mass Spectrometry and Omics Sciences (NEMO), integrates the activities in genomics, transcriptomics, proteomics, metabolomics, petroleomics and intends on expanding possibilities in the set of omics sciences. The provision of services for institutions, industry and internal surveys are supports for equipment quality and excellence of scientific knowledge of the professionals involved.